Home > News > In the footsteps of recruiters
Share on 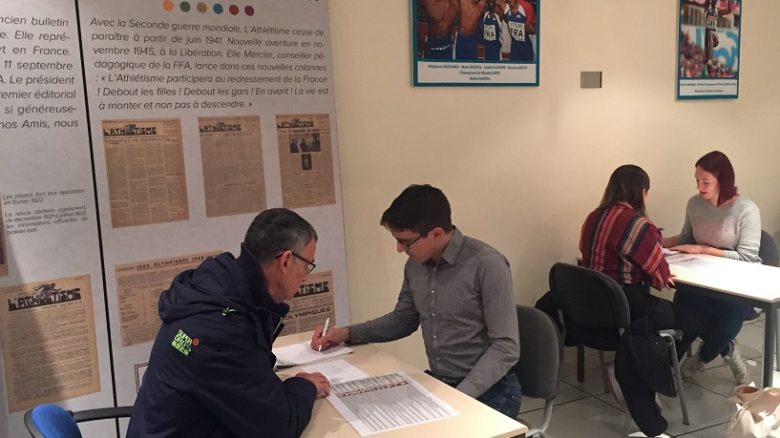 In the footsteps of recruiters

Started in April 2019, the recruitment of the 1,400 volunteers is about to end with the closing of applications this week and the final interviews of candidates. Get a clearer picture of the recruiters who helped the organinsing committee shape the volunteers’ team.

The day has just ended but the entrance hall of the French Athletics Federation is croweded. No athletes around though. The atmosphere is rather studious and for a good reason: candidates are waiting to be called for their interview. “It’s a moment of exchange more than an interview,” says Mathilde Timboni, one of the recruiters. You get to know the candidates and get to know their personalities. We even reassure them because some of them are under stress“. The first words are warm to start each fifteen minutes interview in the offices provided by the French Athletics Federation.

Like Mathilde, they are about fifteen recruiters – all volunteers – to help the organising committee shape the team that will be mobilised during the event, with several sessions per month since last November. If the strikes at the end of the year slightly delayed the program, they did not temper the enthusiasm of the candidates: some did not hesitate to take their car and drive hundred kilometers to honor their appointment. Others, like this Russian candidate, opted for an interview via Skype.

A smile as a main skill

“A volunteer is a smile to begin with. During the interview, we look to see if the person has this particular light in their eyes,” explains Bernard Gaudey, mischievously repeating his own statement to BFM TV being interviewed during last year Women’s World Cup. For this former school principal, interviewing people might seem natural. Yet he only became a volunteer in 2016 by chance after reading an ad: “If I had been told that once I retired, I would participate in sporting events, I wouldn’t have believed it. And yet today, I’m having a blast volunteering! »

More than skills, these recruiters seek to detect the desire to invest and share that lies in each of the candidates, to better distinguish the volunteer from the simple athletics enthusiast. While some missions are about getting close to the athletes or the track, many touch on less flashy but equally important areas of the organisation: accommodation, logistics, spectator services, entertainment, etc.. The work of recruiters is crucial in this respect. Each interview is the subject of a report, shared with the rest of the team of recruiters on the dedicated platform. In late March, candidates will be informed personally and will know whether or not they will continue the adventure until the European championships, before a big Volunteers’ day scheduled on 14 June.

Give back to athletics and French sports

As for the recruiters, they will be assigned another mission according to their availability and the needs of the organising committee. Trilingual and experienced, Bernard would see himself participating in the management of the VIPs as in 2019. Tony admits a preference for a coordination mission at the volunteer centre. In charge of customer service, Mathilde hopes to be able to free herself and put her passion for athletics and her knowledge of four languages at the service of the event. The former 800 and 1500m specialist, a former runner-up in the junior French championship and who studied for several years in the United States thanks to a scholarship, is keen to “give back to athletics what it brought me during this period. This transmission to the community is deeply rooted in American sports culture. Being a volunteer is a way to be inspired by it. This is part of the legacy that these European championships will leave behind them: enthusiasts trained in the workings of the organisation, who will continue to invest in clubs throughout the country and bring their skills to French sport, particularly in the run-up to Paris 2024.