Athletics Park will be a key venue for celebration during the European Athletics Championships, closing a summer of sport and celebration in one of the city’s most famous squares.

Last weekend, French sports daily newspaper L’Equipe Trocadéro unveiled the plan developped by the City of Paris for next summer. Trocadéro will turn into a ” festive agora festive” allowing “fans to experience major sporting events and share their emotions”, starting from the end of May until the end of August 2020. This project will showcase the European Athletics Championships and Paris Athlé 2020 is closely associated to it.

At each event its own configuration: transformed into a fan-zone from the French Open tennis tournament (end of May), Trocadéro will then welcome spectators for the UEFA Euro 2020, the Tour de France (to be confirmed) and the Tokyo 2020 Olympic Games. Before becoming the Athletics Park from 25 to 30 August 2020. For the occasion, the Trocadéro will be more than a typical fan-zone, becoming one of the beating heart of the European Championships – with Charléty – since long jump qualifications (women and men) will be organized there (with free access). Netx to it, at the foot of the Eiffel Tower, will start on Sunday, August 30 the half-marathon then the 10km Festival Athlé open to all.

Every day (starting Thursday 27 August), medal ceremonies will be held on the Athletics Park stage. The medallists will thus be able to be celebrated by a large audience. These ceremonies will be scheduled between the morning and evening sessions to allow Charléty spectators to attend. Finally, Athletics Park will bring the Athletics Festival to life by offering many activities around sport, culture and gastronomy. “This will serve as a test of what we could do during the Paris 2024 Olympic Games, especially to create a connection between athletes and spectators, spectators and sports”, declares in L’Equipe Jean-François Martins, the Deputy of sports of the City of Paris. Parisians and tourists are meeting at the Trocadéro this summer. 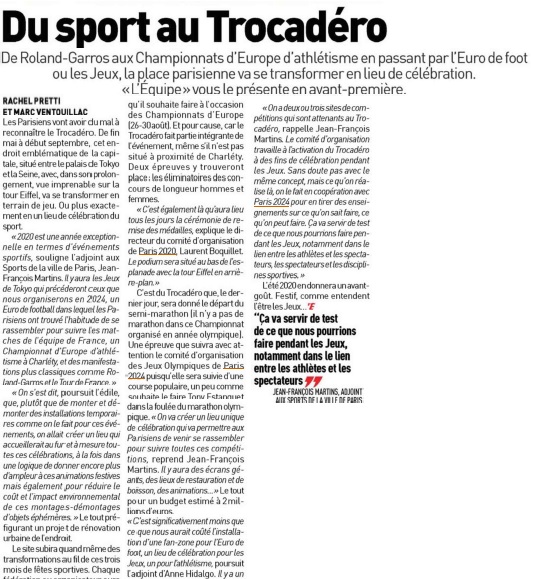